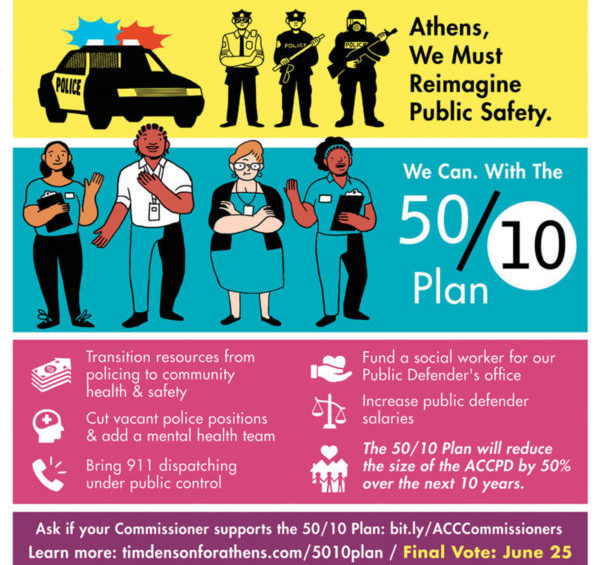 UPDATE [June 27]: The ACC Commission adopted the FY21 budget on Thursday, June 25. While it did not contain all the elements that Commissioner Denson believed it should, most elements of the 50/10 Plan were adopted; such as bringing in house EMS dispatch for 911 calls, funding a third mental health co-responder team for ACCPD, funding a social worker position for our Public Defender office, and pay increases for Public Defenders.

The 50/10 Plan to Reimagine Public Safety in Athens-Clarke County, a budget proposal by Commissioners Mariah Parker and Tim Denson for the Fiscal Year 2021 budget. The budget vote will be held on Thursday, June 25.

Protecting and caring for our community means taking a compassionate, expansive approach to public safety and investing in the resources people need to secure their wellbeing.

The 50/10 Plan to Reimagine Public Safety will:

1 Transition resources from policing into community health and safety [NOT INCLUDED]: The COVID-19 pandemic has highlighted the capacity of our Athens community to effectively respond to complex problems. Yet, the police continue to be the ones tasked with responding to a range of situations – from mental health crises to verbal disputes and drug overdoses – which do not require an armed or forceful response. We’ve seen time and time again how police meet social problems with violence, targeting Black and Brown people and tearing communities apart. Truly redressing the extent of the harm done requires investing in community-based alternatives to policing that enhance health and safety. Our proposal commits $50,000 to fund a community-based committee tasked with developing an implementation plan for a tiered 50% reduction in the size of ACCPD over 10 years, while investing cost savings in unarmed, non-police mental health professionals, social workers, and restorative justice mediators.  [While this element was not explicitly included in the FY21 budget, a Public Safety & Community Building Task Force has been funded and will begin work at the end of the summer]

The committee will function as a working group charged with designing a concrete implementation plan to disinvest from policing and invest in vital community supports that enhance health and safety. It will be composed of a trained facilitator, Athenians well-versed in the local social supports and direct services landscape, researchers with expertise in alternatives to traditional policing, members of communities disproportionately impacted by overpolicing and police violence, and a number of ACC Commissioners. The proposed $50,000 budget allocation would be used to provide stipends for the facilitator, the committee members, and any expert guests the committee chooses to bring in to aid in its work. The structure and process of the committee would function similarly to the Task Force for Inclusion and Equity formed under Mayor Nancy Denson which led to the creation of the ACC Office of Inclusion. This committee also had a $50,000 budget. Such community-engaged processes are critical for ensuring that the recommendations for reimagined public safety are tailored to the specific needs of Athens residents.

We’re currently asking police to solve social problems that the institution isn’t equipped for and wasn’t designed to effectively address. A report by the Center for Popular Democracy, the Black Youth Project (BYP) 100, and Law for Black Lives details how in cities across the country, police spending significantly outpaces investments in vital community resources and services, demonstrating the pervasiveness of a punitive approach to health and safety rather than one that strengthens and nurtures communities. Nearly 1/3 of the ACC General Fund goes to law enforcement. That means we are spending 5 times more on law enforcement than we are on Culture & Recreation and 10 times more on law enforcement than on Housing & Community Development. The results are calamitous, from police violence to a mass incarceration system devastating Athenians and their families. Instead, we should embrace a more expansive vision of health and safety to accommodate the myriad struggles our communities face. The appropriate response to homelessness is housing and economic security, not more policing. The appropriate response to a mental health crisis is mental health services, not more policing. The appropriate response to a tense dispute is restorative mediation, not police force.

Municipalities across the country are taking steps to do just this: expand the vision of health and safety by disinvesting in policing and devoting real resources to the supports people actually need. When Athenians call upon the local government for support and protection in their times of crisis, they should be able to access specialized solutions. Social workers can connect Athenians to critical social and economic aid. Restorative justice mediators can facilitate healing for those engaged in disputes without enrolling individuals in the criminal-legal system. And mental health professionals can respond to situations involving people experiencing mental health crises. By compassionately responding to community needs with a diverse toolkit of potential solutions, rather than with the threat of police violence, we can strengthen our community and address the root causes of social ills. (Cost: $50,000)

2 Fund an additional Mental Health Co-Responder Team for ACCPD [INCLUDED!]:This will put in place a third team for ACCPD’s successful, but underfunded, partnership with Advantage Behavioral Health. The team consists of a case worker who works with a specially-trained officer to respond to mental health crises. Nationally, nearly 15% of incarcerated men and 30% of incarcerated women have a serious mental health condition. And at least 1 in 4 people killed by police have an untreated serious mental illness. Municipalities across the country are incorporating social workers and mental health professionals into the fabric of emergency response, because we know that neurodiverse people, people experiencing mental health crises, people experiencing homelessness, and more need resources, not punishment. These kinds of teams are an important step in preventing undue use of force by police and ensuring that the needs of people experiencing a crisis are met by trained professionals, not armed law enforcement. (Cost: $111,000) [The additional mental health co-responder team has been funded in the Fy21 Budget]

3 Make permanent 5 of the FY21 recommended vacancies for ACCPD positions [NOT INCLUDED]: This is a first step toward the 10-year goal to reduce the size of ACCPD by 50 percent. According to statistics released by ACCPD, the crime rate in Athens is going down, but our community nonetheless witnessed 6 fatal police shootings by the ACCPD in the past year. The Mayor’s proposed budget already recommends these vacancies for FY21. By permanently removing them, the county will save an estimated $200,000 a year after FY21, savings that can be redirected toward employing and equipping professionals trained in helping our community members navigate hardship, connect to resources, and access critical social supports. (FY21: no cost or savings; Future budgets: savings of $200,000 or more) [This element was not funded in the FY21 Budget]

4 Bring 911 dispatching under public control [INCLUDED!]: Right now, when people call 911 for emergency medical services, they have to explain their emergency twice: first to the person answering the initial call and then again upon being transferred to National EMS. In alignment with ACCPD’s report recommendations, we support ACCPD dispatch handling those calls, having the ability to give medical instructions, and dispatching EMS units. This would increase efficiency and save lives by getting EMS units to the scene faster, and increase accountability and transparency by removing private, for-profit companies from the emergency dispatch equation. (Cost: $292,000, taken from E-911 Fund Balance will not affect General Fund) [This has been funded in the FY21 budget!]

6 Increase Public Defender salaries so they more closely approximate District Attorney pay [INCLUDED!]: Public defenders are notoriously overburdened and underpaid, with too many cases and not nearly enough time to devote the energy and resources necessary to maintain the integrity of the constitutionally-protected right to legal counsel. Public defenders disproportionately serve wage-poor and low-wealth individuals who cannot afford to pay for an attorney, so underinvesting in public defenders is just another form of discrimination against poor folks and communities of color. We need to increase the pay of our public defender in ACC so they can devote more time and attention to their cases and ensure just and adequate defense for the communities who have been the most systematically harmed by the criminal-legal system. (Cost: $45,000) [The increased pay for Public Defender salaries has been included in the FY21 Budget!]

Any additional expenses will be easily offset with the implementation of the following savings: